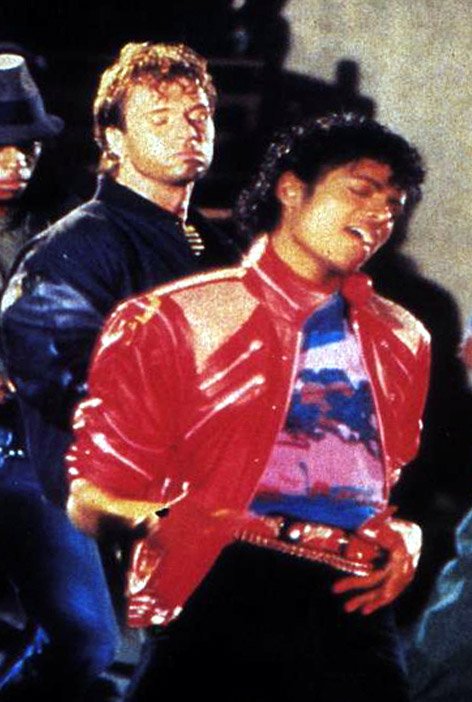 I met Vincent Paterson through Michael.  When I was doing THE WAY YOU MAKE ME FEEL, Michael had said that he didn’t want to dance in the video.  I accepted that.  I had nightmares.  During a prelight day I heard music coming from the rear of the set.  I found Michael, Vince, and some dancers working on a choreographed piece that was brilliant.  So much for ‘no dancing.’  The piece was loosely based on some moves that the gang members were doing on set and was overtly sexual.

I hired various gang members for authenticity.  The problem with this choreography was there was no place to put it.  I watched for a while, then went back to the set and discussed the problem with Geoffrey Kirkland, the production designer.  We rigged a fire hydrant and I smashed a prop car with a sledge hammer (great therapy) and we had our ‘place.’  The choreographed piece at the end of the video was ‘smashing’ and Michael used it in his BAD tour.  Vince’s interpretation of the street dancing was brilliant and was an extension of the natural stuff we did in the prequel to the song.  I think Vince should be a co-director of this piece since he was a heavy influence on Michael’s movements throughout.  Michael trusted him completely.

When I did the (in)famous MADONNA commercial for Pepsi, I was at a loss because Madonna initially didn’t want to sing or dance.  The original idea presented by the agency had her looking at her past but not performing (as opposed to acting).  Her words at our original meeting were, “I ain’t singing and I ain’t dancing.”  There may have been a “fuck” or two thrown in there but I can’t say for sure.  I guess this was a negotiated point in her contract.  I asked Vince to choreograph some ‘street stuff’ for the spot that Madonna observes through her past.  Vince was working on this when Madonna appeared on the set with her small entourage.  She asked me to introduce her to Vince and suddenly she was right in there dancing in the street.  They had a long professional relationship after that and Vince recreated her.  Before Vince she was just a club style dancer.  After Vince she was a professional dancer who understood every aspect of her body.  Her every movement was provocative.  She owes Vince a lot.  So do I.

A while later, I was working on the Ray Charles Diet Pepsi campaign and was trying to work out a version of the Raylettes for the commercial.  The Raylettes were Ray’s backup group and were not part of the contract.  Vince found three great girls and the rest was history.  They were called the “Uh Huh” girls (from the song).   At the end of the campaign they had their own commercials without Ray and Pepsi actually issued a special Pepsi can for them.  I heard that Ray appeared at a Pepsi convention and when the real Raylettes showed up half the bottlers left.  The bottlers had no idea.

Vince always helped me out of tough stuff all the way to DANCING ELEPHANTS (GE).  A commercial that was the most popular commercial in the history of the USA Today poll. The elephant’s dance was a parody of Gene Kelly’s famous choreography in SINGIN’ IN THE RAIN.

Vincent’s masterpiece was a tribute to the people who died in the Twin Towers catastrophe, THRENODY.  Thankfully, we were able to put it on film.

Vince (actually, Vincent) has an amazing resume, including EVITA, DANCER IN THE DARK, CABARET, MANON, and now CIRQUE DU SOLEIL’S “ELVIS.”  He is a lifetime treasure.  He did everything I asked when he was available and I’ll never forget him.