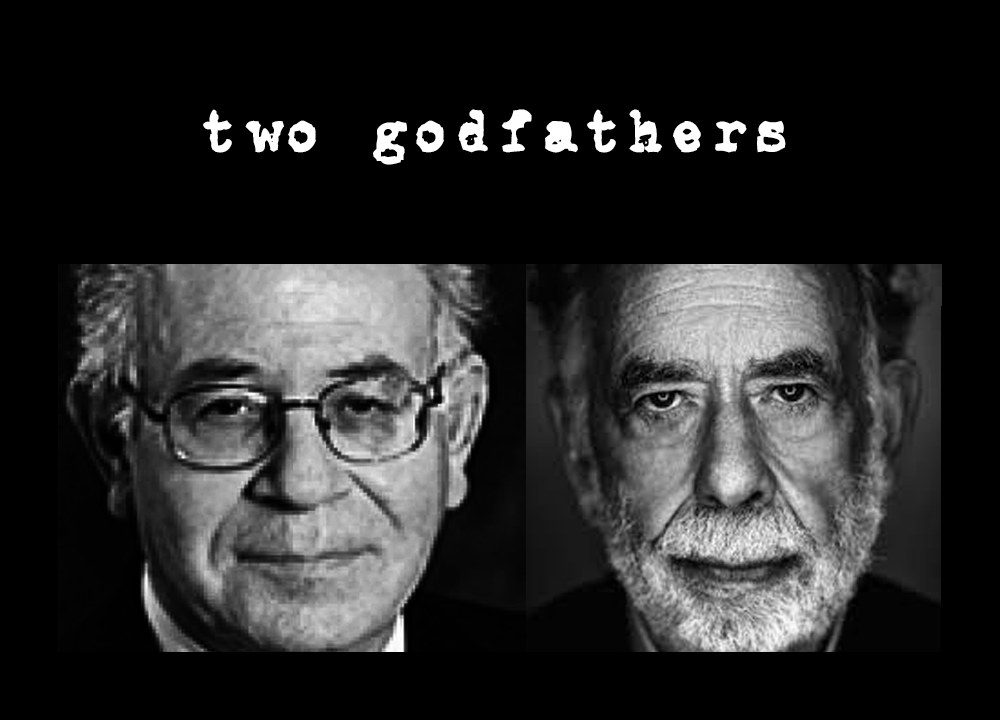 It seems like Francis Coppola (Ford or no Ford?) stumbled onto the wine biz by accident. Story has it that after the success of THE GODFATHER, he and his wife wanted a weekend place and bought the Niebaum Mansion and estate. It’s not clear whether he knew or cared anything about wine, at that time. It just been written that they ‘loved the place.’ ‘The place’ had a fabulous history. It was founded in the late nineteenth century by Gustav Niebaum. They made a wine, Inglenook, that was considered the greatest red wine in early California history. At the time, Coppola didn’t have the whole ‘place.’ That came later.

Coppola claims there was always wine at the table when he was growing up, but it was probably the terrible stuff called ‘Dago red’ that immigrants from the old country made. Two of my friends growing up were Minotto and Petey Cortese whose immigrant grandfather made a bunch of acrid wine from his small backyard vineyard. We were curious once and tried it. Petey snatched some from his grandpa’s stash but it was so terrible that we spit it out in disgust.

That really has nothing to do with the story.

Through a series of fortunate circumstances, Coppola has become a wine ‘marketer extraordinaire,’ referencing his cinema successes calling the wines THE FAMILY COPPOLA.

The other MARKETER EXTRAORDINAIRE is across the Mayacamas Mountains in Sonoma.

IT’S THE BUSINESS WE HAVE CHOSEN.

This obvious quote from THE GODFATHER, might be apt. The family story is full of intrigues.

Ernest and Julio took over the family vineyard after the controversial murder-suicide of their parents. They knew nothing about winemaking, but since Prohibition had just ended, they just went that way. They eliminated their younger brother, Joe from the process. They became successful winemakers but not leaders, until the fifties. Ernest pushed one of his salesmen, Albion Fenderson, to find a new product. That’s where THUNDERBIRD came in. It was a fortified wine designed for winos in the ghettos and was a solid success. The effort to market and distribute THUNDERBIRD makes for another GODFATHER style saga.

Ernest became a brilliant marketer. First, Gallo would hand out free samples of Thunderbird. They would remove competitors products for more shelf space and they were display experts being sure that their best sellers were displayed at eye level. They would back spin competitors screw tops so the bottles would be more difficult to open and apply oil to competitors so that the bottles would stay dusty. The best one was throwing empty bottles into gutters in the skid row sections for prominence. They were pulled into court many times but managed to survive, made illegal campaign contributions and other nefarious deeds. It’s been implied that several prominent judges were in their pocket as well. The salesmen were instructed not to keep written records for more than thirty days. By the early seventies, the Gallo Brothers were entitled THE KINGS OF WINE by TIME magazine.

Albion Fenderson was always around. He was an elegant presence and was always referred to with respect. I don’t know how many of Ernest’s techniques were Albion’s idea.

After all these creative and unusual marketing techniques, conventional advertisers had no chance. None of them ever realized that, including Hal.

Riney tried to bring a prominence to Ernest and Julio’s ‘better’ wines starting with the tag line “All the Best ‘ but his biggest success was marketing the crappy BARTLES & JAYMES wine coolers that were nothing more than a version of the concoctions spewed up mixing crap wine with Seven Up. It was a delight before Crystal Meth became more popular and made Ernest and his boys a few more billions.

In the day, Inglenook made the finest California wines, ever. They ran from 1933 through 1964 and was the work of Niebaum’s nephew, John Daniel, Jr. who made uncompromising wines.  All of his wines were legendary as he would not make a wine if the vintage wasn’t extraordinary.

In the sixties, he ran out of money and had to sell. The wine was never the same.

Coppola came into some serious change after the film DRACULA, and bought the rest of the property.

He hired a French winemaker from Chateau Margaux to recapture that quality. The guy presented him with a fifty year plan and FFC accepted but there ain’t been no result yet.

Meanwhile the Gallo Brothers are gone and a new generation has taken over. I don’t think they mess with other vintners’ screw tops anymore.