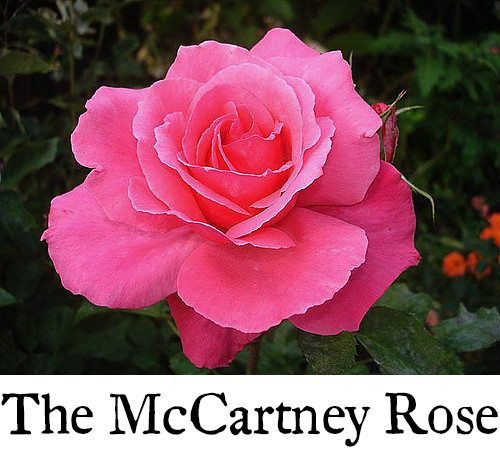 I was meeting Paul at his home in the south of England. He had sent a car for me at the airport so I wouldn’t remember where he lived. On the way, I asked the driver what village we were passing through and he stonewalled me.

We had a good meeting about the video project and Paul escorted me back to the waiting car. On the way we passed a single tree rose in the middle of the scruffy lawn.  I stopped to look at the pink blooms for a moment and Paul said that it was a McCartney rose, developed and named after him. He plucked off a blossom and placed it in my lapel.

When I got back to Los Angeles, I went to a famous rose garden in Pasadena and found several McCartney tree roses and took them back to my house. We planted them opposite each other in what I called the fish garden because of a Lalanne sculpture of a fish in the middle of the garden.

The project fell apart in a mysterious manner.