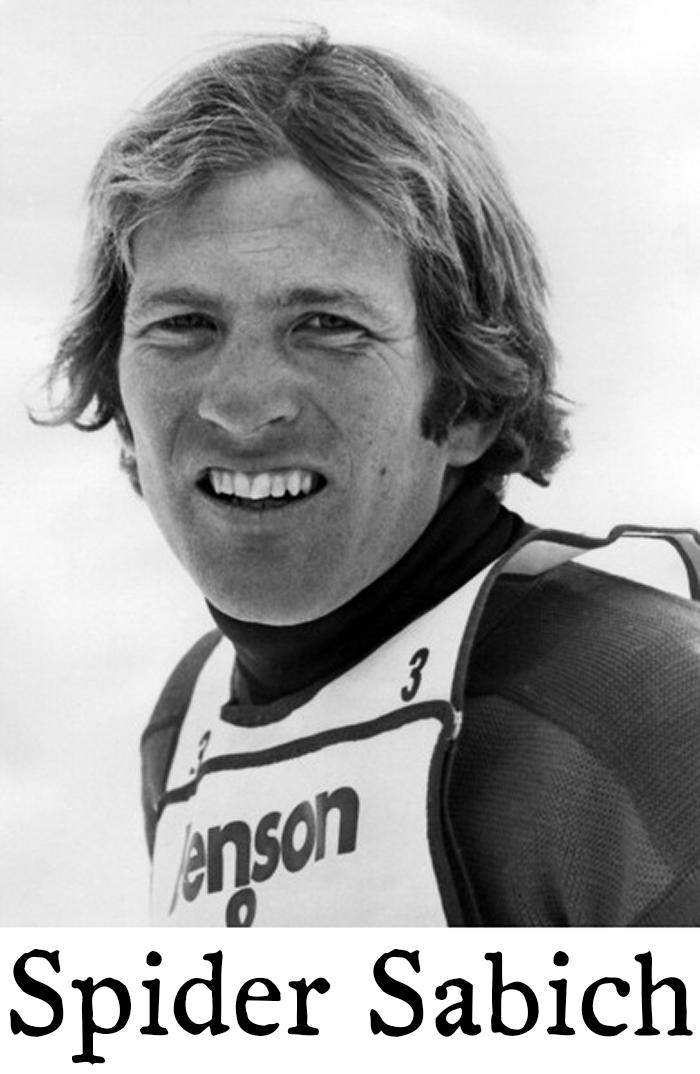 After doing the documentary on Motocross racing, I decided to do a film on my other passion, skiing.  At that time I had a charming partner, Rift Fournier, who was  confined to a wheelchair because of Polio before the Salk vaccine. Rift was able to gain entry into anywhere, at anytime. Rift contacted Levi’s and they said they would be interested in a film about the U.S. Ski Team, but they wanted to know more.

It was near Christmas time and the next big race of the year was in Val D’ Isere, France,  so I went to Val D’ Isere, France, to see what was up.  When Rift and I discussed the idea, Spider Sabich was the star racer on the team.  Spider was a hugely handsome and charismatic presence.  It was said that Robert Redford’s character in DOWNHILL RACER was based on him and when you see pictures, Sabich was indeed insanely handsome.

The good news is I was in Val D’ Isere.  The bad news is that Spider Sabich had left the team to turn pro.  Sabich was an important part of our pitch but now he was gone and I struggled to find a key to the team and racing.  There was none.  The team was dismal, as Billy Kidd had also left recently.

I spent some time on the mountain taking some stills and chatting with the racers trying to find a film but the team sucked.  The only decent skier on the team was Hank Kashiwa.  We bonded a little because he had learned to ski at a tiny upstate New York  ski area similar to mine near Pittsburgh.  He was no Spider Sabich, however.

The thing came to a grinding halt when the head of the team, an Austrian, Willy Schaeffler, demanded money.  I never got along with Austrians named Willy (or Villy as they pronounced it).  My technical director, when I taught skiing, was a ‘Villy’ and we always argued about his dogma.  I tried to tell Schaeffler that there was no money yet, that the idea of the film would bring the money but, that was that and I went home.

The team had a dismal season and there wouldn’t have been any kind of real film there, so I guess ‘Villy’ did me a favor.

Tragedy struck Sabich.  He became a pro ski racer and party animal in Aspen, Colorado.  He hooked up with Claudine Longet, the singer, Andy Williams’ ex, and she shot him dead.  She claimed it was an accident happening when he was showing her how to use the gun.  At the time he was in the shower. Go figure.  She was convicted of a lesser crime, paid a small fine, and served thirty days, on weekends.

The Rolling Stones wrote a song about it:

There’s blood in the chalet.

There’s blood in the snow.

She washed her hands.

Of the whole damn show.

I had stopped skiing in Aspen around that time and moved to Vail.   The Aspen scene had become too Hollywood and the cocaine was rampant (and was supposed to have been a component of the killing).  Ajax sucked as a ski mountain anyway with all these sidehills and transitions.  Snowmass next door was more fun.  The town’s charm had been steamrollered by new development as well.  The town anthem had become, in the immortal words of Sean Penn, “LET’S PARTY.”