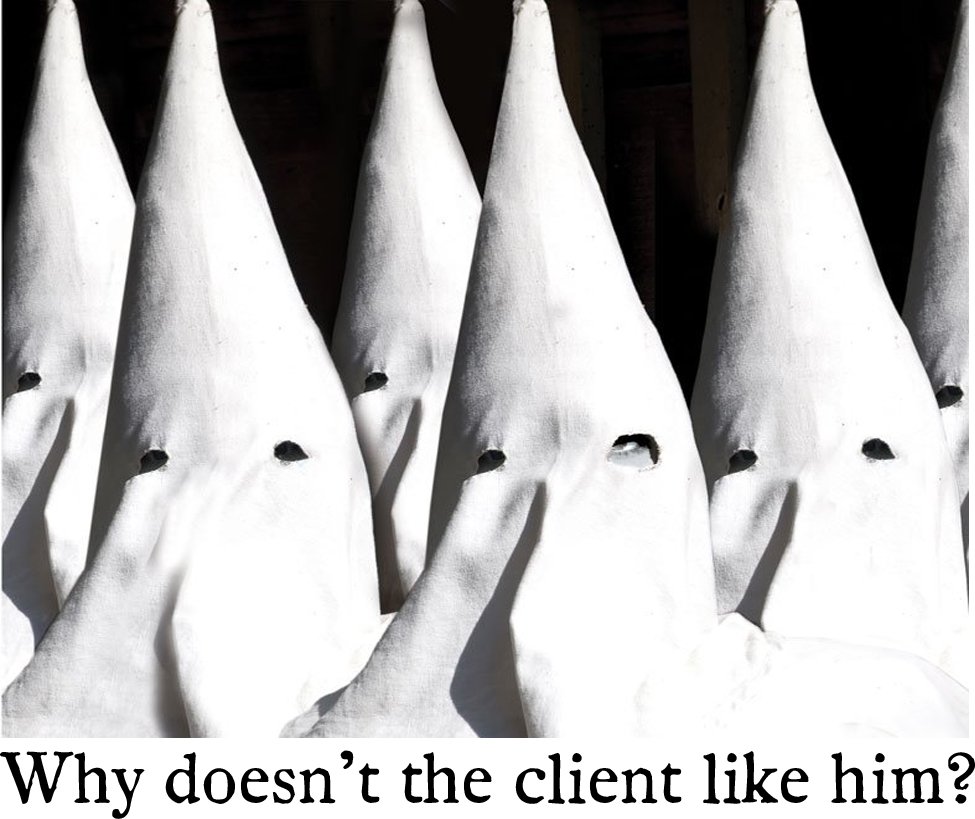 This is more common than you think.  I’m not going to name names.  I don’t want to hurt people on both sides, the clients or the actors.  I just want to get some stuff out there.  Things have gotten better in the last few years.  I mentioned the fact that no Caucasians would cooperate in the 9/11 commercials that I did for Hayden.  That kind of attitude goes back to the Pilgrims who murdered all the Indians and now we celebrate Thanksgiving, for what?  Look up Columbus, Cortez, Isabella, Andrew Jackson, Lincoln (yes, Lincoln), Sheridan, Churchill,  Roosevelt.  All were racists.  You can look it up if you try a little bit.  It’s no wonder that racism has been a problem in advertising.  Blacks and Hispanics have only recently appeared in beer commercials.  Here are some anonymous examples from my history.

That’s not a good answer.

He’s not driving it. He’s sitting in it.

Have the client tell me.

Why didn’t you use the black girl in the final cut?

Sarah (creative director) thought she looked like a hooker.

Hooker?  She’s beautiful.  I’ve been trying to use her for years.

You said that.  Are you nuts?

No, but I need this job.

A few months later I stop at a newsstand and the girl in question is on the cover of  most of the fashion magazines.

They want to do a spot featuring a black kid.

The company had a recent history of racism in the higher levels and had been brought to a certain measure of justice.  It was brave of them to do a commercial with an African-American.  The only problem was that the casting was difficult because the kid had to be an accomplished musician.  By some miracle we find a kid that fits the profile.

I don’t want to use a black kid.

(I’m in a state of shock as we only looked for a black kid.)

I don’t want to use a black kid and that’s the last I want to hear of it.

I leave the place in a rage.  The creative guys ask me to calm down.

Fuck you, calm down.  Nobody wants to work with this client.  You assured me that it was going to be a black kid.

This is news to us, too.  Maybe there’s a way out of this.

Don’t do anything rash.

We take a car back to the city.  I listen to their platitudes.  I hope clearer heads will prevail back at the ranch and the senior guys will make an issue of this.

Back in LA, I come up with what I think is a way out of this.  It’s actually brilliant and foolproof.  I think.  Everyone agrees.  We shoot the commercial.  I see the cut.  Great.  The black kid is in there in a significant position.  It isn’t perfect but no one will be hurt.  Not so fast, Kowalski.  The account people step in and recut the commercial BEFORE the client sees it, thinking that she won’t accept this version.  The recut needed the complicity of everyone involved, the editor, the composer, the creatives, and all the senior creatives. I marvel at the ingenuity to minimize the black kid’s presence in the spot.  In fact, he is almost invisible (Ralph Ellison).  I’m enraged.  I’m still enraged.  I try to call everyone and everyone doesn’t accept my calls.  I contact a civil rights attorney and send papers.  It’s too late.  The commercial is running that weekend.  If I pursue this any further, the black child will be involved in the controversy.  I don’t want to inflict unnecessary pain. Case closed.  Money talks.  I still seethe when I think about it.

We can’t use the black kid.

We don’t want people to think drinking this stuff makes you fat.

We don’t want people to think that.

We can’t use that kid.

You cut the black girl’s bit out of the commercial.  It was terrific.

The spot works without it.

It’s better with it.

You also cut out the other black kids.  What’s going on?

I’m not saying that.

What are you saying?

They’re not part of her (the client)’s culture.  She doesn’t get it.

We’re cutting a longer version with all that stuff back in.

I did say in another part of this tome that I heard (from a reliable source) that Pepsi went away from Ray Charles because Southern bottlers were uncomfortable with an African-American representing their product.  At that time, the Ray Charles campaign supported the entire brand.