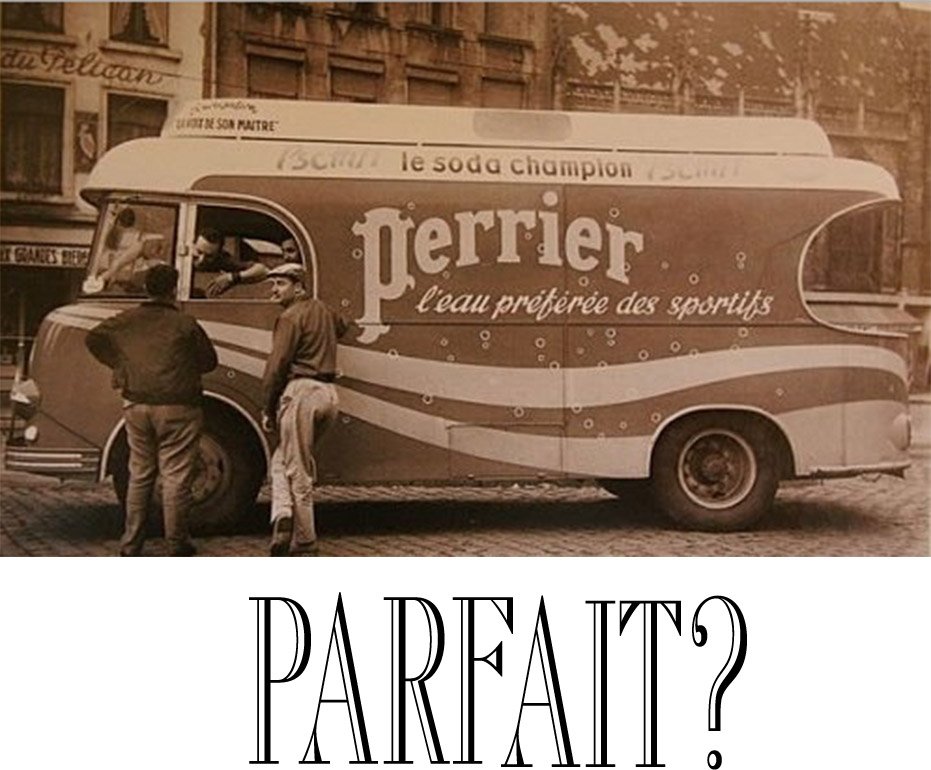 I wasn’t as familiar with France where I was to film a Perrier commercial. I had been to Paris and Cannes but not too many other places. The Perrier commercial was to be a paean to France and things French.  We were going to film to a Zamfir song that was terrific. No matter that Zamfir was Romanian, as was the pan flute that he played. The agency (Riney) said that they couldn’t get rights to his music but that they were going to sample it on a synthesizer (they never got it right).

On the first day of scouting, we ran into wonderful things, so I asked Vincent Joliet to call Paris and send the equipment truck and cameras down now. I had scouted locations several times in the past and when we went back to shoot, the places weren’t the same, the light, etc.

Wonderful things happened. We were sitting, waiting for everyone to get organized and an old man opened a door in the early morning and the door cast a long, dramatic shadow down the side of the ancient building. Vincent rushed to him and asked if he would do it again. A farm couple looked like they were right from medieval times. A young couple walked across Pont des Arts in Paris (pre-locks) and Vincent had to chase them for blocks and ask them to return to be filmed.

We had already filmed for a week when the client arrived. The Riney people said:

‘The client’s upset that we shot without her.’

In order to shut out the nonsense I wore a headset while filming. I said that it helped me set up the shots. In reality I was listening to Miles Davis. I was sick of the panflute by then.

We had a casting director go into the various villages a day or so before and find interesting locals that were willing to be filmed. We also had a wardrobe truck to adjust the looks of the people. Toward the end of the shoot, one of the agency folk remarked how ‘authentic’ everyone looked. He was shocked when we showed him the truck full of wardrobe. He had no idea.

The client paraded around snapping off shots right and left.  I had set up a shot of a farm lady walking toward the camera holding a basket of greens from the garden.  She walked toward us and I held my breath as the shot was developing beautifully with a shadow passing over her.  Just as the shadow disappeared she turned to the camera and smiled, ruining the shot.  I turned and saw the client standing there with her trusty Nikon smiling at the woman snapping away, oblivious to her ruination of the moment (that could never be recaptured).

Dan Mountain had written the spot but he couldn’t go to the shoot.  The  creatives were concerned with Hal Riney doing the voiceover, since Hal was thought to write everything that the agency did and these guys wouldn’t  get credit.  They had listened to many tapes of announcer demos and didn’t like any.  I suggested Richard Basehart, an actor that uttered the famous words, ‘Call me Ishmael,’ in Huston’s MOBY DICK.   We got his demo and he was terrific, but he died before they could record him.  Riney did the voice and everyone thought he wrote the thing.

The tag line was, ‘Perrier…It’s Perfect.’  Genius.  What client would refuse that notion.  Well, it turned out that Perrier wasn’t ‘perfect’ after all. There was a scandal when incredibly minute amounts of benzene, a carcinogen, were found in samples of Perrier. The company pulled all of its products all over the world. Andre Soltner, a famous French chef in New York, was shocked, as his sales of Perrier had grown twentyfold in the past few years (because of the commercials?).