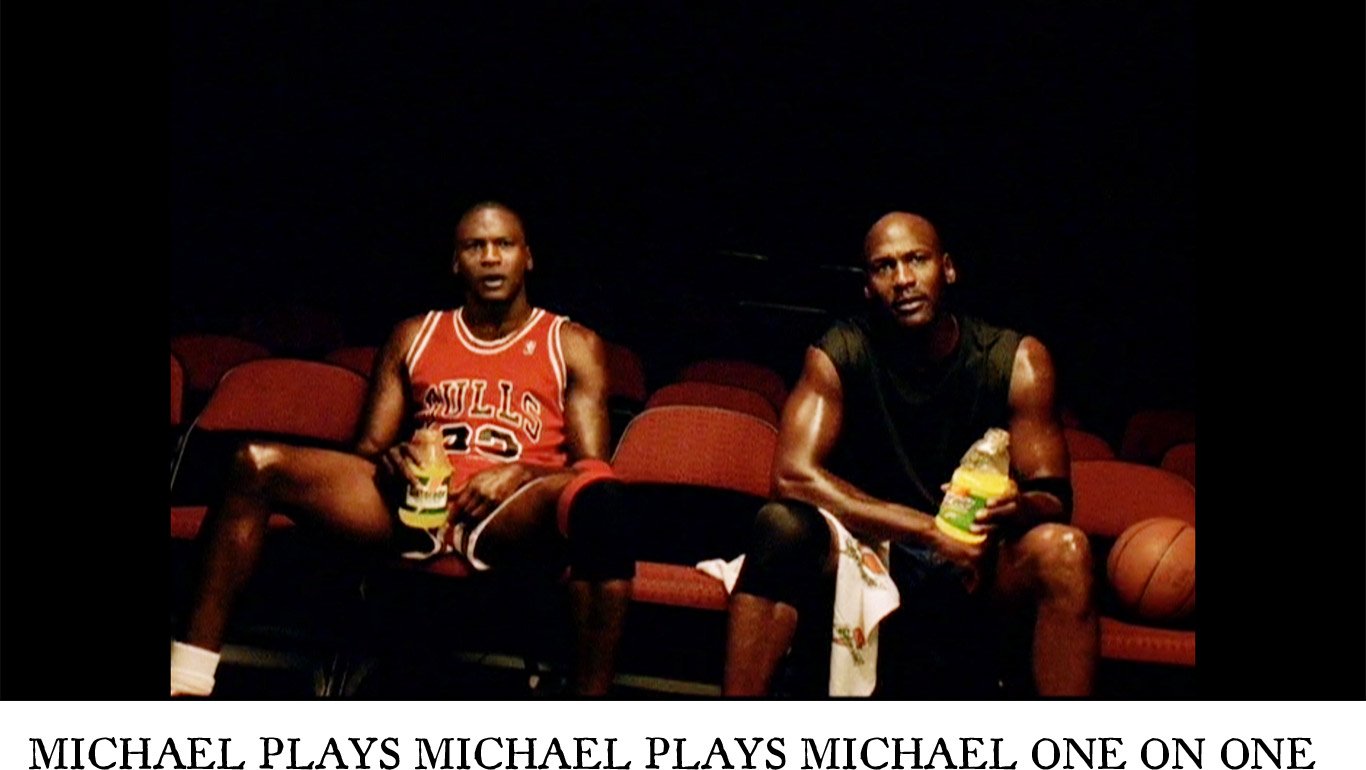 This is tough. I have a script that has Michael playing himself, but there’s a catch, the present Michael (playing for Washington) is playing the early Michael who played for the Bulls (with hair) and then is challenged by the North Carolina Michael (lots of hair). TOUGH!

The usual way thing like this are done is to go to the stock library and marry old footage with new footage. The trouble with this notion is that every piece of great footage has been seen by everyone.  His highlight video has been a best seller for years. There ain’t no new stuff appearing anytime soon.

Another issue is that many commercials of this type have been done, especially one with Shaq. It needs a fresh approach. A few (many?) years earlier I did a spontaneous spot with Michael when he was playing with a bunch of pro extras on another shoot where I recorded his trash talking.  Also, from working with Michael and Larry Bird I had experienced a great deal of trash talking (mostly directed at me).  FOR THOSE OF YOU UNFAMILIAR WITH THE TERM, TRASH TALKING IS THE USE OF INTIMIDATING DIALOGUE DIRECTED AT AN OPPONENT TO INTIMIDATE AND DISTRACT HIM (OR HER).  In a game or other intense situation the language can be brutal, referencing one’s mother, wife, children, race, religion, gender, sexual choices, what have you.  The best at it were Michael and Larry Bird.  There were no rules but it was reserved for the insiders.  Michael Richards’ fragile career came to a screeching halt when he tried to trash talk hecklers at a comedy club.  I thought that the element of Michael trash talking himself would make the commercial fresh and original.  But how?

I had tried many years earlier to create Michael Jackson as a child and failed, having to resort to using old footage. In fact, Michael (Jackson) and I were talking about redoing it assuming that the technology had improved since that time. It hadn’t.  No one had a clue how to do what I wanted to do. My last resort was Digital Domain, a legendary post house, ironically across the street from my office. I had avoided them because they were always involved in a huge film project and were very corporate.  I was never allowed to speak to the artists, only their producers. It turns out they had been experimenting on a secret project for Paul Allen. I saw some of the footage and it was promising. They became really interested and warmed to the idea because it was a project that was to run on the Super Bowl and get some fame (or notoriety) and help their other projects along. Fred Raimondi had been in charge of the Paul Allen project (I think) and he was extremely positive that we could do something fresh and original.  He could and we did. To my knowledge, nothing of this sort has been done before or since.

The one thing that made the shoot easy was a young man who could dunk and move like Mike. We found him at the last minute. He was homeless, living in his car, playing for a low level professional team, not even CBA level. The owner of the team threatened him with dismissal if he did the commercial but the kid took the chance.  He did a terrific job, trash talking and dunking whatever was needed. He did get fired for doing the spot and to add insult to injury, the ad agency refused to pay him normal residuals because he was not recognizable, his head being replaced by Michael Jordan’s. The agency also tried to cut my fees saying that we didn’t shoot the required number of hours that had been estimated. I had to sue them to fulfill the terms of the contract. The final insult was Michael Jordan’s refusal to make a phone call or two to help the poor guy. Another silly result was that Nike was upset with me because they felt the commercial was too Nike-esque. Wonderful business we’re in.

On the plus side, the execution of the spot by Fred and Digital Domain was excellent. The effects were seamless. I had told them initially that kids would go through the commercial frame by frame and Fred put little nuances in the spot, like Michael’s famous ‘tongue sticking out.’ They used these techniques in the film BENJAMIN BUTTON to make Brad Pitt have distinct looks through the reverse aging process that is the spine of the film. The effects in the commercial were so seamless that people, including professionals, have no idea how it was done and there is no way they know it was digital. I find that 99% of special effects aren’t believable and that affects the integrity of the drama. This spot shows how honest and truthful digital work can be. I haven’t seen anything to date that has this quality. Thanks Fred.