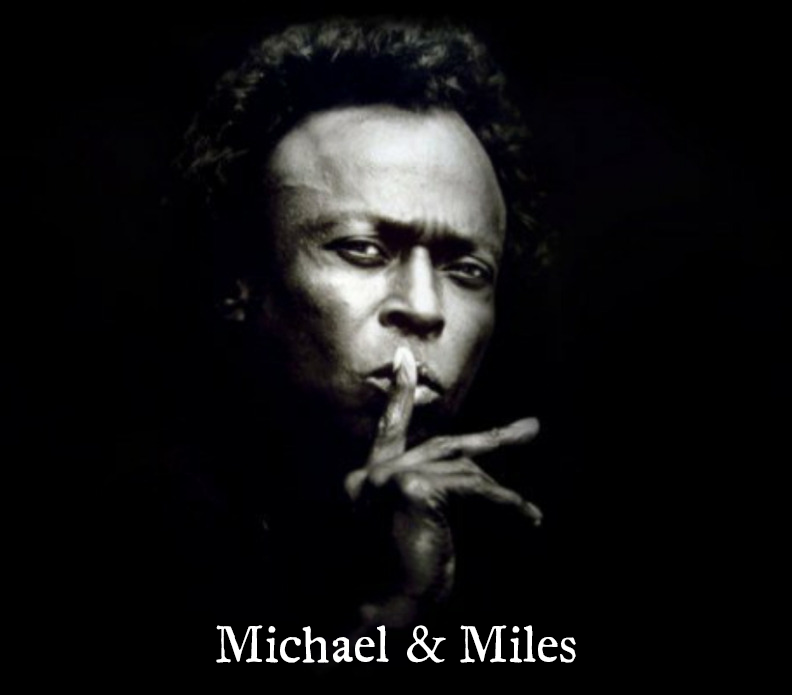 Michael Jackson was sitting in the Ferrari, scat singing like Ella Fitzgerald. I recognized the tune and it wasn’t one of his. It was SO WHAT from Miles Davis’ famous album. KIND OF BLUE. Michael was ‘scatting’ with his unique rhythms but the melody (actually a riff) was still there.

I asked him what he was singing at he told me it was from one of the records I had given him after the last shoot. When we had talked, he knew nothing of Jazz and some Classical music so I had given him a small collection of examples, Mozart and Miles.

What Michael was ‘scatting, SO WHAT,’ was one of the best and earliest examples of MODAL JAZZ. Don’t ask me to explain.  Steve Allen, the famous late night TV host was a Jazz lover and part time player had Miles Davis on his show and tried to explain the music to his audience. He gave up after stammering for a few moments.

Michael gave the riff an interesting beat. Quincy Jones had told me that the only real difference in pop(ular) music was the beat. Listening to Michael riff on MilesDavis was thrilling.

At that time I was working on the long form THE WAY YOU MAKE ME FEEL. Michael was extending the music video form that he started with THRILLER. Martin Scorsese did a long form for BAD.

‘Wouldn’t it be great to use Miles’ music for the prequel to the video?’

I went through everything and found several pieces from BITCHES BREW that would work. It was one of Miles’ early works using electric instruments and I felt it would compliment Michaels’ music and maybe lead to some sort of collaboration, a dream.

Miles was represented by COLUMBIA RECORDS and Michael was on a subsidiary, EPIC, so there was nothing in the way of a deal and this video could expose Miles to a new non-Jazz audience. I also thought that Michael could re-record the piece. My mind was scrambled.

No matter. When I presented the idea to Frank he killed it immediately saying that it is impossible to deal with Miles Davis.

And that, as they say, was that, but Miles did touch Michael.