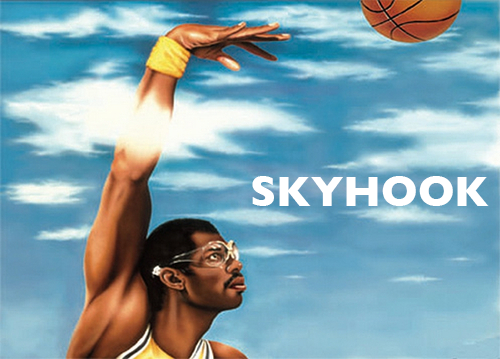 When I moved to New York for the first time, Lew Alcindor was a high school phenom, from Power Memorial Academy, a Catholic High School. His team was honored as the greatest high school basketball team of all time.

My favorite player then was Wilt Chamberlain, then a pro, but I had followed him from high school (Overbrook, Philadelphia) and marveled at his physique and power. His fate was that he could never bring his team past Big Russell, who I admired after seeing him win his two NCAA Championships at USF. It wasn’t Wilt’s fault as he never had the quality of teammates that Russ had. Michael couldn’t win either, until he got great teammates.

I loved Lewis at UCLA, even though he was hampered by the anti-dunking rules. His sky hook was unstoppable and I loved it because it was my favorite shot when I played. In high school, my team nickname was Hook and my class yearbook picture was me shooting a hook shot. I actually modeled my shot after Clyde Lovellette, a Boston Celtic, whose claim to fame was being knocked out with one punch from Wilt Chamberlain. Nobody shoots a hook anymore. I took Jordan to H- O- R- S- by using a baby hook before Michael beat me with a flat footed dunk. Michael was shooting left handed to make the game a little fair although that was early in his career when he didn’t have the best jump shot.

When Chamberlain retired, I transferred my love to Lewis, who by then had changed his name to Kareem. Through the successes of the Lakers in the seventies I dreaded the thought of him retiring, but he did.

Flash forward and I’m filming an APPLE commercial in a mock airplane in a studio. The joke of the commercial is that Kareem is sitting in a cramped seat, working on his laptop, and the guy in front of him reclines his seat back. The spot turns on Kareem’s look and the clever voiceover.

When I first meet him he’s dry, distant, and had a could care less attitude. He didn’t seem to like being there. I joke with him and ask if he wants to shoot some hoops at lunch.

He just stares at me. Contempt.

He does a decent job reacting, but during the shoot, one of the actors, Paul Ben- Victor asks for a break.

We take a break,  finish the shoot, and that’s that.

By the way, Wilt was the only player to ever block Kareem’s skyhook.