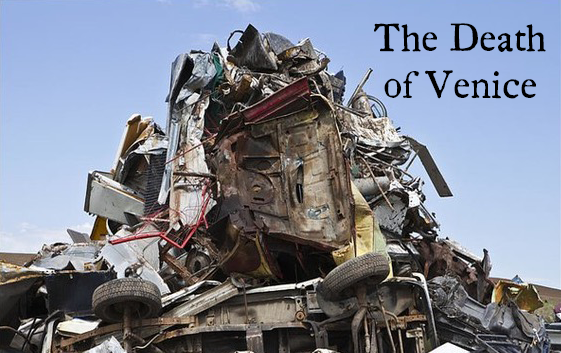 It’s probably 1976 or ’77 and I’m at GEMINI GEL on Melrose looking for some Richard Serra monographs. I trip on the floor, and look down and see that it’s industrial grade plywood.

‘When are you gonna finish the floor?’

‘Sir, this a room by Frank Gehry.’

That was Frank Gehry at that stage in his career. The place was crude but interesting in a, well, CRUDE, way. Cheap plywood was the material of choice in this part of the gallery. The experience did whet my interest in Gehry, though.

About all I could find at that time was his house on the west side that’s made of plywood, chain link, asphalt, corrugated metal, mundane materials. It was interesting but I was told the neighbors hated it.

At the same time I had a house in the Hollywood Hills (on stilts) and the High Tech architect, Joseph D’Urso was working on plans for an addition. Gehry’s work seemed like a version of stuff that D’Urso was doing.

D’Urso told me that the house was fine as it is and wasn’t worth the effort I wanted to give. He also told me to look at Neutra houses, that might were closer to what I wanted to do. Ironically, I had a friend that had a Neutra house in Nichols Canyon and I liked the simplicity but it was tired and weary. I went about looking at all the modernist houses in Los Angeles and found that they all needed extensive work for different reasons, mostly urban decay, pitted metal, crumbling concrete, the misunderstanding of materials.

I wound up buying a Postmodernist house in Topanga that is nothing like anything I had planned. Meanwhile, I was building an International Style, Richard Meier-easqu home in Vail, and a Supemannerish warehouse in Venice. While the place in Venice is being brought to code, I rent studio space from Chuck Arnoldi and Billy Al Bengston. I have to subdivide into some offices so I tell the architect, Bill Adams to do a Goof On Gehry, plywood, plastic, cheap stuff.

Bill does and it’s a hoot. Bill also introduces me to Andree Putman’s furniture that is being sold in New York and I get some chairs and tables the fit the Gehry-esque mood of the place.

Billy invites me to dinner at his house with a few of his other friends. We’re sitting, chatting, waiting for some of the other guests to arrive. His wife asks me how I like being in Venice and the part of the studio I’m renting. Just as I’m about to describe the ‘Goof On Gehry’ style, Frank Gehry and his wife enter. It’s a Marx Brothers moment. I was a millisecond away from destroying the evening as I was about to go off on plywood, plastic and corrugated metal.

I don’t remember much about that dinner. We all got along. Time goes by and Gehry makes the transition to a major major major architect if not THE architect. At that time I admired Arata Izosaki and didn’t think of Gehry much. Besides, Chiat-Day had just moved into the neighborhood and I saw that Venice, this mellow Venice’s doom was approaching.

Sho’ ‘nuf Gehry designs a modern office building for Jay Chiat. It’s defining feature is a huge binocular sculpture at the entrance. The sculpture is attributed to Claes Oldenberg and, the story I heard was that it was inspired by Jay Chiat, an art aficionado. When Jay and Frank discussed the model of the building, Jay said that it ‘lacked something.’ There was a pair of binoculars (why are they referred to as a pair when there’s only one instrument) on the desk and either Frank or Jay put them in front of the building, and that was that.

Lee Clow hated the place (Why wasn’t the agency called Chiat-Clow?) and they eventually moved to a huge warehouse. Lee loved warehouse spaces where you could have a creative workspace and surfboards, dogs, and basketball courts were part of his milieu. The Binoculars Building was dull inside, a conventional office space and completely wrong for Venice. Anyway, it was on the edge of the Venice/ Santa Monica border so we blamed it on Santa Monica, but the end was near.

I had moved to Venice because of Tony Bill. Tony was/is a successful producer/director/actor that had developed a terrific, choice film complex in Venice. I met him for advice on a script I was working on and fell in love with what he was doing and where he was doing it. So I bought an old warehouse with a sketchy past and fell in love with that unique part of Southern California, and I was the only one there.

It wasn’t bad at first. They occupied a warehouse and Gehry did some cool shit there, like a conference room made of cardboard and plywood that was like the inside of a giant fish. But then I guess ego got hold of Chiat and they built the Binoculars Building.

At that time Venice was about artists and bodybuilders, Joe Gold, Ed Ruscha, Billy and Chuck, Laddie Dill, Dennis Hopper, Tony, Robert Graham.  They’re all gone now, even Chiat Day is gone replaced by a nondescript mob of tech millennials.

But Gehry is still there.

Ironically it was somewhat across the street from MOCA, designed (subtly) by Isosaki. Now there is a bit of competition from a new neighbor THE BROAD MUSEUM. I think they want to be referred to as The BROAD but I thought that the Frank Sinatra estate had the rights to that phrase. They pronounce it BRODE.

They all may be beautiful (to some) but the acoustics perhaps less so. Keith Jarrett gave a concert and complained openly about the acoustics. I went to a jazz concert there and the sound of the drummer came from behind my right ear, although he was in front of me (at some distance) but I didn’t like the reworking of Carnegie Hall either. Most acclaim the acoustics but they may never have been to La Scala or the Musikverein in Vienna.

The building is a far cry from Gehry’s deconstructivist days of plywood and cardboard. It had a long gestation period, that was resolved when Walt’s wife put her foot down and threw money at the problem saying ‘Get’er done!’  One issue was that Gehry had been advised that he had to resort to lasting materials in order to become famous. He wanted to build the concert hall with laser cut stone to avoid comparisons to Bilbao, but had to, as Walt’s wife said, get ‘er done. Ironically, the style of Disney Hall is referred to as deconstructivist. Where’s the plywood?

What did I do?

What did I say?

The GOOF ON GEHRY studio that I had built actually was nominated for an AIA Award but when the final judges came it had been torn down.

I suspect that he walked away because there was some controversy about the house he was to build in Venice. I heard later that the neighborhood felt threatened by his proposal, probably based on a fear that he would do something absurd, like his first house in Santa Monica. He played with the original house, a conventional Dutch Colonial design, by adding corrugated metal, chain link fencing, and plywood. What he did looks like a defiant gesture to the existing neighborhood. It was said that someone fired bullets at it. The house is an example of DESTRUCTIVE architecture, a joke. I think Gehry was afraid that the neighbors in Venice, far less ‘refined’ than those in Santa Monica, would do something more drastic.

Gehry said in an interview that 98% of stuff is crap although he later apologized claiming he was tired from travel. But he was accurate, because 98% of his work is crap, starting with his first house, a disrespect to the neighborhood. This neighbor hate seems to pervade Gehry’s work. Most of his work seems to be ESCHER like and is at odds with the areas where they exist and living in them must feel like being in a cartoon.

I think he’s a better sculptor than architect and his earlier days seem more honest. The Gemini GEL additions are still interesting although the wood is a mess. His Fish Sculptures are terrific. He built three connected houses for Chuck Arnoldi that were interesting and unpretentious and harmonious. There’s an irony here. Dennis Hopper bought them, then built a house that hid them from view completely. Dennis worked with Brian Murphy who used a lot of Gehry’s materials (especially corrugated metal) and built a beautiful house that is a neighborhood masterpiece. The irony is that it hides Gehry’s much like the BERNINI FOUNTAIN in Piazza Navona in Rome that mocks the facade of the church. I don’t know if Dennis and Murphy intended this, but…

As beautiful as Disney Hall is, it stands out disharmoniously, especially in contrast to MOCA across the street. The new BROAD is equally obnoxious.

Why am I kvetching about this? It isn’t Gehry’s slight at the Graham thing, but maybe it is. I asked about his new house and he turned away. It was a silly moment but when I questioned why, I started to re-examine the situation and realized that his neighbors didn’t want him around after what he had done to his previous neighborhood. From a certain angle, the house looks like a factory or even a junkyard. Gehry defends the use of various material weakly. He says he used chainlink (to no practical purpose) because it ‘was ubiquitous.’ What does that mean?  He just didn’t care about the neighborhood. He wanted to make his statement and that was that.

NEVER INSULT SOMEONE BY ACCIDENT.

When I was building my studio in Venice, I asked the architect, Bill Adams, what we should do with the funky exterior? He said leave it funky, that’s what Venice is. We left it funky. The Binocular Building right up the street is completely out of place, and I have no idea how they got permits, but it has been ignored by tenants.

Most of Gehry’s work is insulting. The stunning Disney Hall sits on a corner like a pile of trash left by an alien.