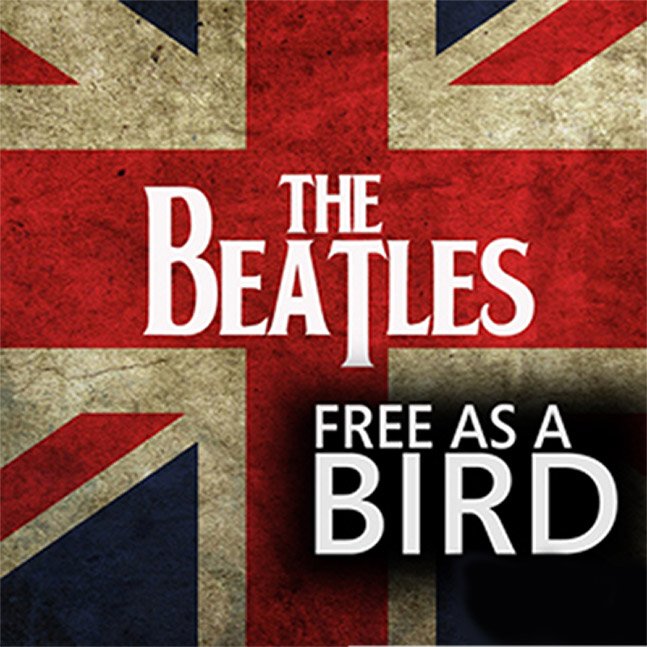 David Saltz called asking if I was interested in doing a video for the Beatles. David was coordinating all the work that was going into the BEATLES ANTHOLOGY for ABC. It turns out that there were two new Beatles songs that had been created for the special using modern digital technology.

Yoko suggested that they use some demos that John had recorded on a Dictaphone and go into a studio and make a completely new song. They removed the piano from the demo and made a new recording. Some will say that it wasn’t but it’s all there, each of the Beatles performing together aided and abetted by modern recording systems. It was like finding a lost treasure.

I flew to London to meet and listen to the tracks. This was about a year before the deadline of the show. I met with Paul and Neil Aspinall. Neil was the fifth Beatle, having been with the band from the beginning and now running Apple Corps and producing THE ANTHOLOGY. Neil played the track for me on a tabletop blaster.  It sounded terrible. Neil explained that it was a very crude mix and that I couldn’t have a copy. ‘Play it again so I can try to remember it.’ It didn’t sound any better the second time. We chatted a bit and Paul told me his idea for the video. It consisted of a flip book revisiting the Beatles through old photographs. I lied and said that it sounded interesting. Neil also said that they had a huge inventory of photographs that had never been seen. Okay. Paul also said that he was producing a film about the GRATEFUL DEAD using photographs that Linda had taken and that the technique looked promising. Then they showed me a video that Paul had produced of the other song, REAL LOVE. It was terrible and I bit my tongue.

I left, wondering what I had gotten myself into.

A while later boxes and boxes of Beatles photographs arrived at my office. I began going through them and there was nothing there. All the interesting material had been used over and over. This stuff was just the leftovers and dregs. I struggled with the flipbook idea wondering how it could sustain the song. The reality was that it couldn’t. I photographed a blank flipbook and had a segment of a Beatles television performance placed in the book and although a bit clever, it was just that, a clever moment.

Time is going by and David calls and sets up a meeting in London to discuss progress. There has been no progress. The only progress is that Paul’s idea doesn’t work. How do I tell Paul McCartney that his idea sucks?

I call Michael Patti and ask him if he wants to meet Paul McCartney. Michael is a brilliant creative director. We had met on the infamous MADONNA commercial and had a great professional and personal relationship since. Michael is also an impassioned Beatles freak. I had goaded him in the past by saying that the STONES were a better band. That would make him apoplectic. We met in New York and took the Concorde to London. On the plane, I gave him all the details I knew.

We first go to see a screening of Linda’s film at Paul’s request. We agree that it doesn’t work. Then we go to Abbey Road.  Neil, Paul, George Harrison, Derek Taylor, and George Martin are there listening to master tracks for THE ANTHOLOGY. Michael is in a state of shock. We all chat a bit. George asks me where I’m from. I say originally from Pittsburgh, the Liverpool of the United States. From that moment on he calls me Joe Pittsburgh (he also calls the project FREE AS A TURD).

Michael and I wind up at Neil’s office with Neil and Derek Taylor. Luckily I have skated by having to tell Paul that his idea doesn’t work. I go over the work I’ve done and show the small video piece. Neil agrees that this idea is no good. Play the demo for Michael. Michael’s eyes light up when he hears it.  Mine don’t.  Neil asks what I’m planning.  I tell him that  I have spent most of my time working on Paul’s idea, and that my own idea is sketchy. I didn’t want to propose it until I spoke with Neil.  It is half truth and half bullshit.

Earlier, Neil had shown me some cover art by Klaus Voorman. It consisted of a number of torn posters from Beatles albums. Each torn poster revealed the album that had come before.  My flimsy idea was to have a bird fly through the posters and Beatles history. I said that the bird should be a forlorn sparrow. In the back of my mind I wondered how I could marry the sparrow with footage. Neil liked the idea but said ‘No bird. We can’t see the bird.’

I will never get the Beatles to agree on the bird.

Neil had an interesting but frustrating agreement with the surviving Beatles and Yoko. They all had to agree completely on any decision. It was not a democracy.

On the plane back to New York, Michael and I fleshed out the idea.  Michael also proposed that he get his partner, Don Schneider involved.

‘Because we can work on it at the office.’

Soon after, a miracle happens. Derek Taylor had been at the meeting when we discussed the idea of a bird flying through the Beatles’ early lives. He faxes a free flowing idea chart that cements the value of the idea and serves as an inspiration for the entire piece. It is a free association tone poem. The charge is to capture the tonality in a video.

Derek’s beautiful piece proved that the idea worked and was appropriate to the song. The fact that Neil didn’t want to see the bird freed me from the practical problems of incorporating the bird into the piece. Then…

Tragedy! I get a call to do a movie, SPACE JAM. That means I have no control of my time for the next six months. After the production schedule is set, I find that I can do the movie and film the video and make THE ANTHOLOGY deadline. It will be tight but I can do it.

No one else thinks so.

We start on the project by discussing events in the Beatles lives and how we can fit them into a video. There is a part in the song that recalls the backward masking and the “Paul is dead” mysteries of past Beatles work. We study all the lyrics and go over all the legends. Don is a terrific artist and sketches small storyboards after we agree to the content. Don’s style is a bit cartoony, though. I have Sherman Labby, a brilliant artist that was working with me on Space Jam, redraw Don’s boards. Sherman was famous for his work on Blade Runner and his work was more pictorial than Don’s, more serious. I thought that would be a more practical way to present the work to the various Beatles.  I’m not sure that Don knows that to this day. Sherman was also a Beatles fan and contributed a number of ideas with his work. This process went on for months as it took a while to get responses from everyone.  For example, George Harrison, a Formula One freak, was following Damon Hill around the racing world. We would send a package to Australia, then to Brazil, then to Monaco. Later, when George saw his part of the budget, he said he would rather have a McLaren (a rare sports/racing car). George also wanted to play a part in the piece, the character of George Formby, a famous English entertainer from the thirties.  Formby’s popularity at the time was compared to the Beatles and FREE AS A BIRD had a coda that used a banjolele, an instrument that was  a combination of ukulele and banjo (hence the name). I didn’t want any of the Beatles in the piece as I thought that it would destroy the fragile conceit of the piece. I also thought that the sample that was used was taken from an old George Formby record. Years later, Neil told me that George had played the instrument and I will always regret not using him.

Most of the work went into finding the true facts about the various songs’ origins. There were many, many versions through the years but we finally had a list of the real moments that satisfied everyone.

The scenario was arbitrary since the bird would fly through time as well as the events. I never decided on the final form since I had never seen the actual locations and Sherry Margolies, the editor, was with us so we could assemble the piece as we filmed. The art department was brilliant. The art director found a number of props that moved the story along, including some amazing pig masks (Little Piggies) that got me through a problem that we couldn’t solve in the concept stage.

For the actual filming, I had assembled all the possible ‘bird’ equipment available, an Akila crane, the Louma crane, a great steadicam operator, helicopter and Tyler mount, and an unusual mini helicopter. Louise Frogley did a brilliant job in wardrobing the talent accurately, and the filming went along smoothly with contributions from everyone. The magic of The Beatles infused and inspired everyone.

Neil was back in his milieu to insure accuracy and made brilliant suggestions and insights while we filmed, spotting stuff in Liverpool that moved the story along.  Remember, he was there at the creation.

We were editing in London while we were still shooting the last parts of the piece. Paul McCartney visited and made the comment that the film seemed to run out of gas after thirty seconds. It was the same comment that he made months before. I said that it would gain  momentum after we put the archival video footage of The Beatles in. That comment seemed to satisfy Paul. I guess he didn’t see the sarcasm in it. His only request was to remove some girl from a scene and a nurse that was exiting the bakery. He caught the reference to Mother Mary and didn’t like it since Mother Mary was reputed to be his mother.

Ringo’s only request was an elephant. George wanted a sitar. I went back to California to film Ringo’s elephant and other bits and pieces that were easier to do back there. Everything had gone as smoothly as could be hoped for.

Johnny Semerad was doing a brilliant job coordinating all the composites and things went along smoothly until I had to screen the rough cut for Yoko. She liked it as it was and immediately called Neil stating that she didn’t want Paul to change a single frame. A week later, I showed her the final picture and she was disappointed. She had liked the rough better because it was ‘more artistic.’  I was shattered. However, she called me later that evening saying she was wrong and that the piece was perfect. Well, the deadline was met and FREE AS A BIRD became part of The Beatles oeuvre.

It was a privilege of a lifetime.