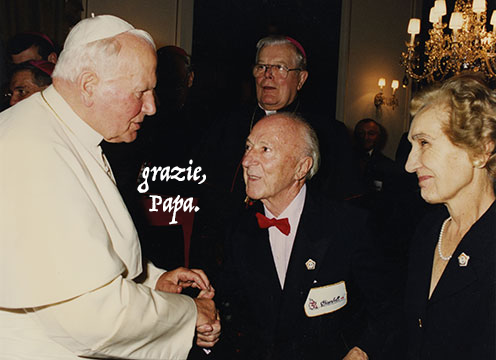 I’m in Italy (for the first time) in a modest restaurant on a hillside a bit north of Rome, on the way to Orvieto. We’ve stopped for coffee (Expresso, Espresso) and I’m starving having just arrived from LA. For some reason, production met me at the airport and we had to scout immediately. I’m staring at a bowl of fruit waiting for a Panini and there is an ugly ass pear staring back at me, so I decide to put it out of its misery. It’s kinda green with brown spots, a reject. I bite into that sucker and omygod I’ve never tasted anything like it.

I’m about to shoot a Gallo spot that Riney hates. Ernest told Hal he wanted a spot with Ernest’s friend Giambelli, a New York restaurateur (It’s amazing how many put an ’n’ into that word).

Whatever Ernest wants, Ernest gets.

In that time Giambelli had the finest Italian restaurant in New York City. I don’t know why Hal disliked Giambelli. Giambelli looked like the undertaker in the first scene of THE GODFATHER, tiny, wiry, thin mustache. I think Hal was looking for a Marcello Mastroianni (there was one there but that’s another story).

The idea of the commercial was that Giambelli was coming home to his village after a sojourn to America, and he brings some Gallo wine for his friends to compare (price). During the prep, I had dinner with Giambelli and Vincent and I remarked how wonderful the food was in Rome, especially the  pasta and prosciutto fiche (prosciutto and figs to you).

Giambelli lifted his hand with his index finger extended and in a distinctly Italian negative manner.

‘Isa no good food in Roma.’

‘Then, where is there good food in Italy?’

Well, I could not argue with a man that had cooked for the Pope.