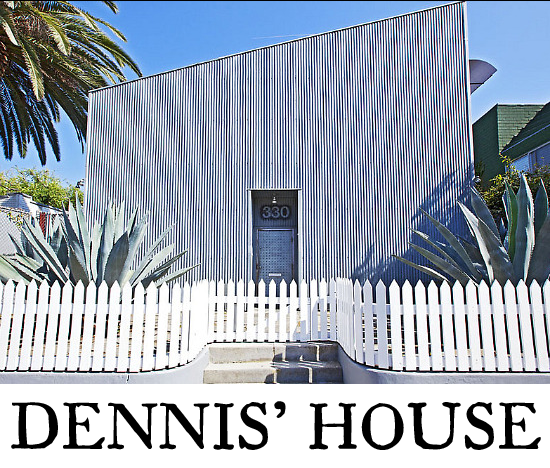 Dennis Hopper and I were friends (friendly) for some time after we worked together on Nike. Although we were only a block and half apart in Venice, we saw each other more away from there, Cannes…

Hopper was a terrific actor, painter, photographer, architect, writer, just about everything. His house on Indiana Avenue was extraordinarily special. Actually it was a compound of dwellings by Brian Murphy and Frank Gehry. Before Gehry was Gehry he was an avant garde Venice architect with a vivid imagination for humble materials, plywood, chain link, cardboard. Dennis commissioned three houses by him and Dennis told me (laughing) that Gehry had built them in the wrong direction. They’re really considered condos.

The Brian Murphy house is the really extraordinary place, probably the very best house I have ever seen. Murphy wasn’t really an architect but a creative builder using found objects and materials. He out Gehried Gehry. The façade of the house was (is) spectacular and witty, its front a windowless façade of corrugated metal, two huge agave plants, and a funny suburban wooden fence right out of BLUE VELVET. I was sitting with Dennis in his kitchen, one day, and remarked about a huge Basquiat painting across from us. Dennis said that I should have seen his collection before his divorce. A Schnabel portrait of him was nearby. Incidentally, Schnabel’s ‘house’ in New York was a distant second to Dennis’ in terms of creative living. I guess they became friends when they made the Basquiat film together. Schnabel would stay with Dennis when he was in Los Angeles. He wore a stained bathrobe while he pattered around the house.  At least he did when I saw him.

Schnabel lived in an old meat market factory in the meat packing district in lower Manhattan. The furniture was oversized as were the paintings. What Schnabel did to the residence was terrific but Dennis actually  built his.