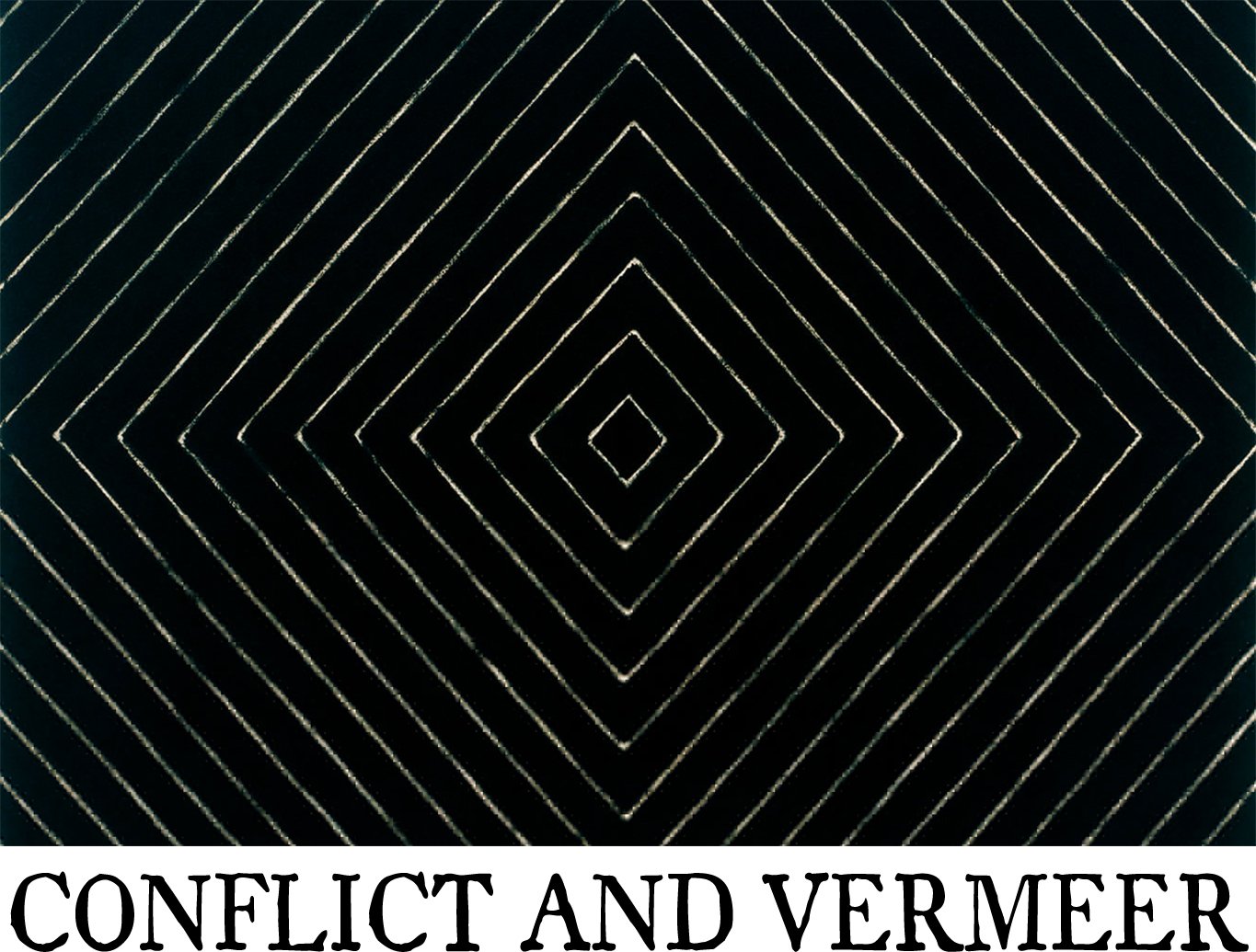 Hal Riney and I were always in some conflict when we worked together.  The conflict always seemed to improve the work.

I had been attracted to commercials while doing documentaries because of the control and formality.  I had wanted to be a painter but was sidetracked by bad advice and practicality, but I still had a painter’s eye for light, texture, and color from the years of museum art school.  I was attracted more to the Dutch and Flemish painters. Rubens, Vermeer, Rembrandt, than the Impressionists. There were no opportunities to film like this in commercials.

One of the problems was that the ad agencies always had final control over the way things looked and could ‘pump up the volume.’ I always had a sense of responsibility as well, so I never took the risk to ‘go the limit’ (I know, two clichés in a row).

Two filmmakers I admired that achieved what I had wanted to were Ridley Scott and Gordon Willis.  I admired and still admire the work they did and understand the risks they took.  Willis was continuously under fire from the studio for the darkness in THE GODFATHER, and Scott’s brilliant imagery in his first film, THE DUELLISTS was more inventive than Kubrick’s in BARRY LYNDON, also a film I admired.  Maybe I thought to out-DUEL Ridley some day.

I had previous conflicts with the coloring of Riney’s work in the past.  Only under certain circumstances did it meet my expectations.  Hal and his editor had a long history and I was an intruder in that process.  I almost got violent once in an early digital post transfer session where they discovered how much you could manipulate the film.  It almost seemed like you could make something out of nothing.  Maddening.

We were shooting some Henry’s commercials in Oregon and were stretching our meager budget building a portion of a western town.  Vance Lorenzini, the production designer, was a hands-on guy and was using a chainsaw himself, together with some local laborers, to complete the job.  He had built the town around an existing log cabin that we dressed to become a bar.

We had purchased and old table, perhaps not an antique, for a pivotal scene where a cowboy was playing cards while the other kibitzed.  The table was too tall for the cowboys to sit comfortably so I had Vance cut the table legs to fit them.  Riney walked in with Jerry Andelin, his right-hand man, and walked through the set.  Jerry was describing  everything (not that Hal couldn’t see for himself) and Hal exploded.  I think Jerry mentioned that we had cut the table legs to fit the scene.  Hal was furious as he said then that he wanted the table for his house.

I shook my head as all the backbreaking work we had done went unnoticed and I felt this was a petty outburst considering what we still had left to do.  Hal always had demons flying about so I just let this go as I’m sure this was really about something else.

As, in the past, this seemed like the last time we would work together.

Back to Vermeer (Rembrandt?  Hals, not Hal’s).  We are now in a digital world and we can now see what we get.  That wasn’t true in the film world.  Film has its own character as does the laboratory that develops and prints the film.  The color timer is important as well.  Each part of this chain is (was) important and it was imperative that these be kept under control.  A mistake or glitch in any part of the chain could destroy the work.  In simple terms, what you see ain’t what you get.  Unless you knew precisely what you were doing, you wouldn’t know until you watched dailies.

Another important part of the visual process is the light meter.  A mere twisting of the wrist could be the difference between success and failure.  I haven’t seen a light meter for years.  When I shot documentaries I could ‘take the light’ without a meter since I knew the characteristics of each film emulsion I would use.  In fact, I used a meter once and wrecked the look I wanted.  I should have used my intuition.

Where is this all going?  Be patient.

Another issue is the harmony of all the elements (then), the filmstock, the lab, the camera, and the lenses.  I have a set of ancient, handmade Zeiss, high speed lenses that I treasure.  Each lens has a characteristic that I understand.  Those lenses were hand ground by a technician that was unique in the world.  There is a part of Europe where exist workmen that combine art and science.  It’s tiny part of the world that touches Germany, Poland, and Central Europe.  These artisans were the only ones qualified to grind these lenses properly as they had the mental stamina to do what could be called rote work and the physical skills to do the work properly. This has all changed now, but at that time Zeiss was the only manufacturer in the world with that capability.

Lingerie.  I wasn’t happy with the professional lens diffusion available, the diffusion and fog filters. I never liked the sharp definition of 35mm film and I softened that at every opportunity to achieve a painterly look to film. I used women’s stockings to film through.  Shooting in Paris, my assistant cameraman saw the makeshift filters I was using and told me that Ridley and Tony Scott used Chanel stockings.  We went to a Chanel store and looked at various stockings with a loupe to select the best for new filters.  Since it was Paris, no one gave a second look.

Through various processes, I discovered that natural fibers were better for lighting style than artificial sources.  Silk diffusion was being replaced by plastics.  I insisted on natural silk, or even better, muslin.  I eventually had a set of each that I traveled with so I could understand the color.  At customs in some countries the inspectors would look bewildered when we tried to explain that we weren’t smuggling fabrics.

Lou Donelan, the best propman of all time, was an expert on the use of beesmoke to diffuse the light. I loved the smell of bee smoke as it was the same incense that we used in Church when I was a choir and altar boy (yes, it’s true). Sadly, it’s been outlawed and a chemical-based material is now used.  I guess several thousand years of expertise didn’t stand a chance against OSHA.  Bee smoke was, as silk and muslin are, a natural product.

Back in Oregon, all these elements come into play. Because of Riney’s complaining about the table, something snapped since I felt we would never see each other again. I wasn’t happy with the photoflood lighting that was supposed to represent an oil lamp or whatever they used in the day. The thing that worked best was a standard forty watt bulb. Peter Litomiski, a Hungarian Freedom Fighter, assistant cameraman questioned my judgment and took his own light reading with his light meter.

‘My leader, the needle does not move.’

‘Does it look good?’

‘Yes, but it will not translate to film.’

‘My leader (this must have been a remnant of his travails in the old world), I cannot be a part of this.’

We didn’t have the  dubious luxury of video playback on these shoots. Video playback is an expensive time waster, and I never used it unless it was required. That day/night, I just shot. I paid no attention to Hal and Jerry, except to honor Hal’s excessive dialogue requests. I was sullen and surly and off-putting. I do remember Hal using an old stopwatch to time the takes while sitting next to the script supervisor who was doing the same thing.  Hal’s watch was archaic and echoed around the room, announcing the end of the take.

‘Your timings are inaccurate.’

‘You’re using your thumb. Olympic timers use their index finger.’

‘The index finger has fewer muscles and the movement is more consistent. For camera, the thumb action is more dramatic, and we’re not shooting you, but we can hear you. Should we send the script girl home?’

I was particularly angry at the time because we were doing take after take and the nasty old man that we were filming was losing it and Hal kept insisting that we redo these takes because of a mysterious ‘time’ that he was looking for but couldn’t or wouldn’t explain.

I think I used a larger light bulb for the shot of the old man because it never matched the feeling of the rest of the spot.  I don’t know why I let that happen.  Every time I see the piece that irritates me.

The film looks about how I wanted it to look. I exposed for the extreme low end of the negative film curve characteristic so it could only be printed one way. Film is usually exposed for the middle of the ‘film curve’ so there is a latitude in printing. I eliminated that element of compromise. One of the issues here was that exposing the film like this eliminated BLACK. I never was that interested on black black anyway, since it was a vulgar element in painting. We used umbers and siennas for pigment mixing, avoiding black. The only painter that used black in his painting was the Impressionist Manet (or was he a post-Impressionist?). I remember seeing a painting of his with a woman in a black dress that was shockingly modern. There are Frank Stella’s BLACK paintings that I admire, but they aren’t figurative. They are post-painterly Abstraction, or so I’ve been told.

I never thought of these elements together before now, as they combined to be another unwitting character in the piece, together with the brilliant script, the actors, the table, and the rest of the mise-en-scène.

I guess Hal’s ‘thumbed’ timings worked because the commercial came together quickly and looked the way I wanted it to look. It was successful in the marketplace and won the usual Cannes Gold Lion, but other strange things happened.  I got numerous calls, some complimentary, some not so.  Some of the ridiculous callers asked how I could do such a thing, but two stood out, both complimentary.

Kathleen Kennedy, Steven Spielberg’s producer, called to set up a meeting and when we met asked for details about how we did that, the lighting, the script, the people. I told her that we cast real people in most cases and the look was the look and I had no explanation for that.  I wondered why she asked what seemed simple questions and then I realized that Steven had
come up under a restricted studio system that questioned the look of the brilliant THE GODFATHER.

The director Joseph Sargent, who had directed the terrific, original TAKING OF PELHAM ONE, TWO, THREE called and asked a simple question.

‘How do you get away with that?’

What I realized then was the power of all knowledge and that it can be put to use without compromise. I never looked over my shoulder for approval. My knowledge of my process was greater than anyone else’s there and I used (abused) it to a measure of success. This is not to say this was some profound work.  In the end it was just a good commercial.