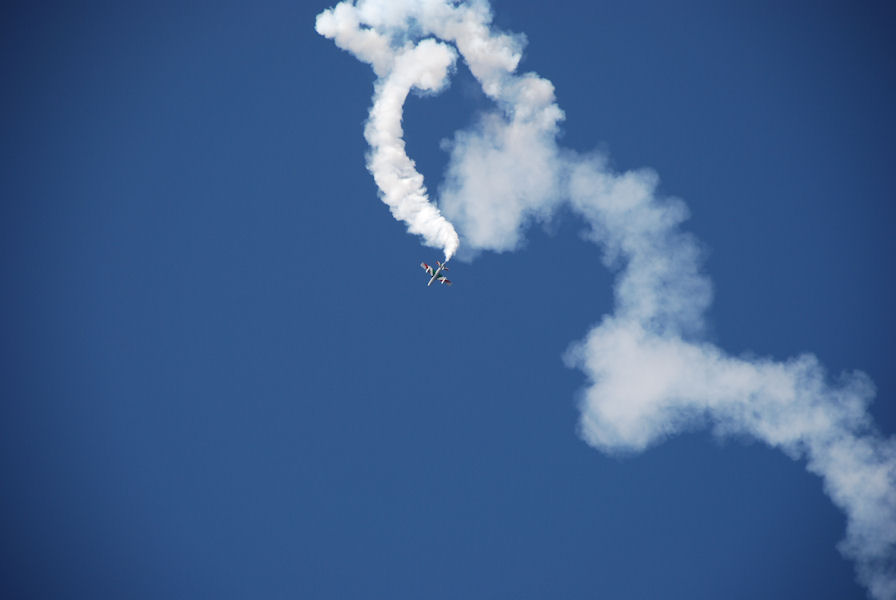 ART SCHOLL was a terrific stunt pilot that I worked with a lot. Jim Gavin was an equally terrific helicopter pilot as well. We were shooting a Blitz Weinhard commercial over Mount Hood and the guys were messing with each other since we were outside normal FAA zones.

Art was flying a vintage biplane that we had painted to be a ‘Border Control’  plane, intercepting beer smugglers. Gavin and I were hovering on a mountainside to reveal the biplane dramatically. I was awaiting the ‘roll’ sign from Gavin when he suddenly swerved the helicopter, as the biplane appeared suddenly and almost hit us.

Art:  Just making sure you guys were awake.

I went to Piru airport to film Art doing a Lomcovak maneuver, a radical stunt also more aptly named the Drunken Czech. When he finished the stunt, he flew upside down a foot or two over the runway. His wife was standing next to me and remarked that Art was a complete show off and will probably die doing something crazy.

Over the years, Art and I worked together a bunch of times, always a joy and a thrill. He once scared the hell out of clients on a film reccy, flying a DC 3 in a narrow valley.  I remember looking across the aisle at the copywriter, white as a sheet, gripping the seat as the wingtips seemed to scrape the hillsides.

Another time, the Gavin/Scholl team buzzed a film crew on a Malibu location. Scholl dropped a smoke bomb on them from his Chipmunk.  He claims to have known them and just wanted them to have a surprise.

Sadly, Art met his doom on the set of TOP GUN.  He screwed his Chipmunk into the ocean. The ‘accident’ has never been properly explained.  Art just said. “I have a problem…”

His body was never recovered.