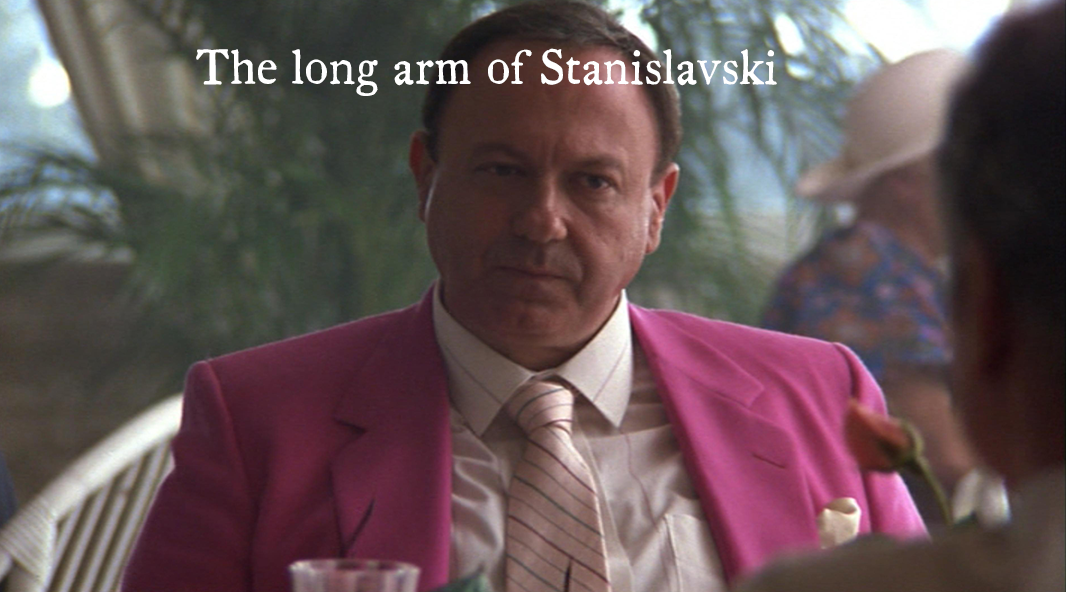 I was having trouble with a character in LET IT RIDE, an obnoxious Jew.

Trouble, and troubling. I searched and searched for someone to bring a temperament to this character, a charm, anything positive as there was nothing in the script except his bad temperament. I even spoke with Don Simpson about it but that wasn’t going to work. Don wanted to act in something but this wasn’t going to be it (Tony Scott bit the bullet in DAYS OF THUNDER).

It was a similar frustration to the Jennifer Tilly character (his screen girlfriend). David and I were sitting in the conference room waiting for the next actor, a meeting. Established actors don’t ‘read’ they ‘meet.’ The actor we were waiting for was Allen Garfield. The door opened and Allen walked in wearing the precise wardrobe that was indicated in the script and in the several strides it took him to reach us, I knew he was the guy.

We chatted for a bit shook hands and we were off to the races (sorry).

WHILE I GOTCHA HERE.

There was a huge funny moment during the shoot that I shared with Austin and he’s never let me forget it. I was in the john and Allen gets into the next stall and starts a scene right out of the script.

‘While I gotcha here…’

He pitches a few additional scenes for his character. I tell him that the script’s locked and I’ve already been admonished for filming a few things that aren’t in the script, probably because of the upgrades of extras I’ve liked and pulling things from the book that I felt enhanced the attitudes I liked.

Meeting over, but more to come.

Allen didn’t like Dreyfuss much. In one scene, an over the shoulder to Dreyfuss, Allen had up a check he had in his hand, precisely where Richard’s face was. I knew what he was doing but didn’t want to upset the scene so I just moved the camera, using a silly excuse. Another time there was a blowup between the two because Richard was giving notes to the actors around the table and Allen ripped into him.

‘I’ve worked with great directors and actors, Coppola, Billy Wilder, and have never experienced behavior and disrespect for actors like what’s coming from you!  The director (me) works out a scene and as soon as he turns his back you interfere…’

I stopped the thing calling for a break. Allen was to leave for a few weeks, drop/pickup, because he wasn’t needed, so the incident didn’t cause any lasting damage, but I discussed the incident with Richard and David suggesting we replace him and reshoot his stuff, but they decided things could work out. The truth is that Allen spoke the truth.

A little time goes by and Richard stops me and hands me a hand written note on legal paper. It’s from Allen and is a reasoned, intelligent diatribe against Richard, repeating some of the stuff in the table tirade, with a number of additions, and criticizing him for disrespect for his fellow actors and his chosen profession. It was intelligent, thoughtful, and accurate. Of course, I told Richard that the guy was full of shit and asked if he could continue to work with him. Richard said he could.

End of (that) story.

Years years years and tears later, I worked with Allen in a commercial and he was brilliant.  The spot was for IBM and was the first IBM spot to win a Clio.

Allen has passed and is missed. He was a student of the famous ACTOR’S STUDIO, probably one of the last before the mentor Lee Strasberg passed away. The training and respect for the profession shows in his work and explained his distress at Dreyfuss’ behavior. The Actor’s Studio’s roots go back to Stanislavski from Russia and then the Group Theater of the 30’s, then The Actor’s Studio itself. THE METHOD was a component of The Studio’s teaching and it consisted of a naturalistic approach. The term ‘being in character’ came from the Studio and ‘breaking character’ was anathema. Both Jennifer Tilly and Allen knew their characters better than I did and that actually described most of the cast. Actors can find stuff in a character even the writer doesn’t know. Any ‘notes’ I would give the two would be subtle and not comments on the characters they created. That’s why Richard’s last second comments were probably insulting to Allen and distressing to Jennifer.

Ironically, I lied to Richard about the distresses he caused, and blamed myself. I think Richard saw through my bullshit lie, but he did change his behavior. So the long arm of Stanislavski had an effect after all.